Hi, first time poster here, tough I've been lurking for a couple of years now. Hope you guys can help me to get my cab running.

Last year I've bought a Jaleco Pony Mk.III, working but in a really rough state (some rust, bad paint job, all the electronics absolutely covered in dust, etc). It's my first arcade machine, so I've been slowly learning all the aspects about owning and operating one. The long term goal is to restore it properly, as in having it completely rewired, sandblasted and powdercoated, etc.

Until now I stayed away from the electrical part (except switching boards every now and then), since I know very little about electronics and the wiring is a mess. I didn't want to deal with it until I learned more.

I've been using it every other weekend, a couple of weeks ago I turned it on and noticed the game didn't start; the monitor turned on though, as well as the fluorescent tube. Tried switching the boards (I only own two pcbs, Final Fight and SF2CE, both bootlegs) and the behaviour was the same. What I noticed is that the switching PSU's light didn't turn on anymore.

So before doing anything, I decided to try to understand the wiring and document it, so I know what's doing what. Here's a couple of pics of the wiring, and the diagram I came up with (it's not 100% complete): 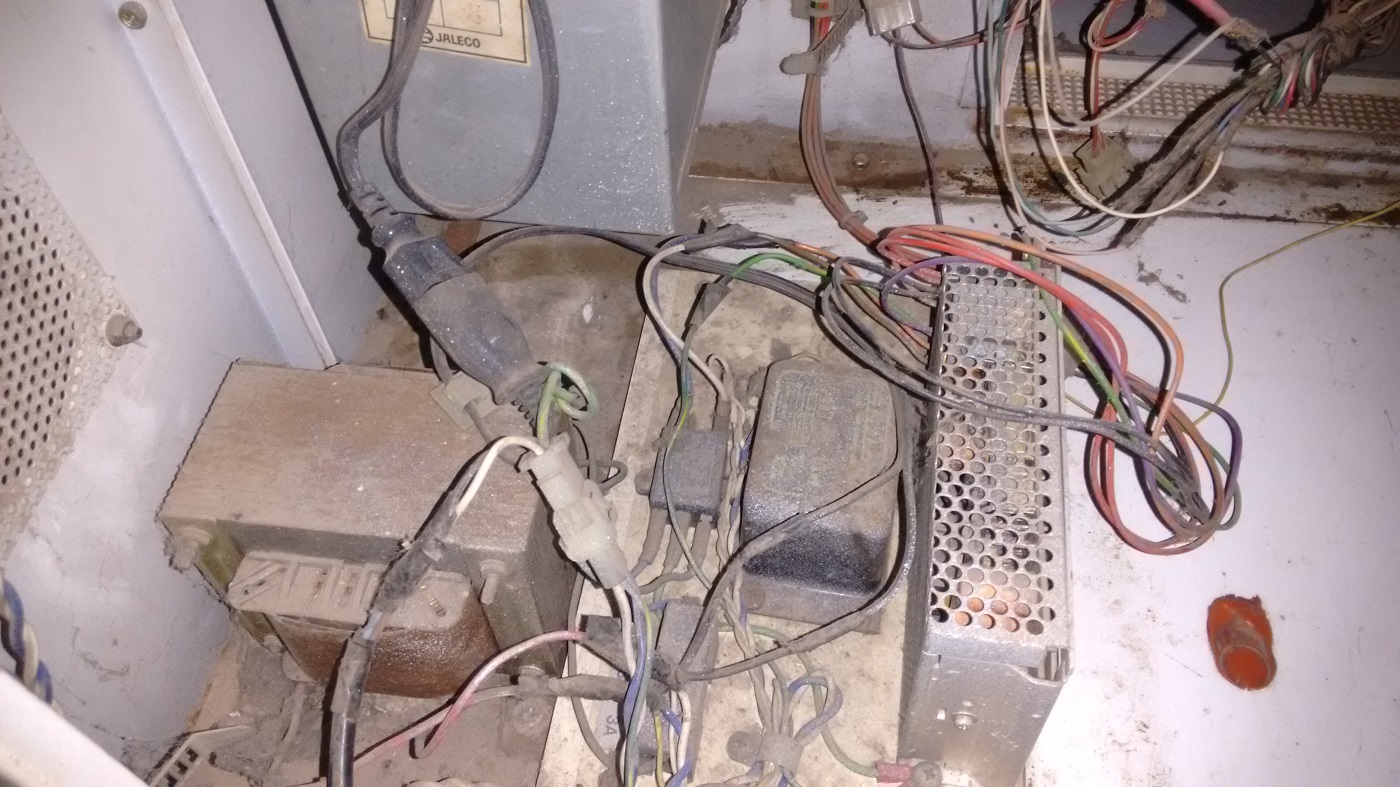 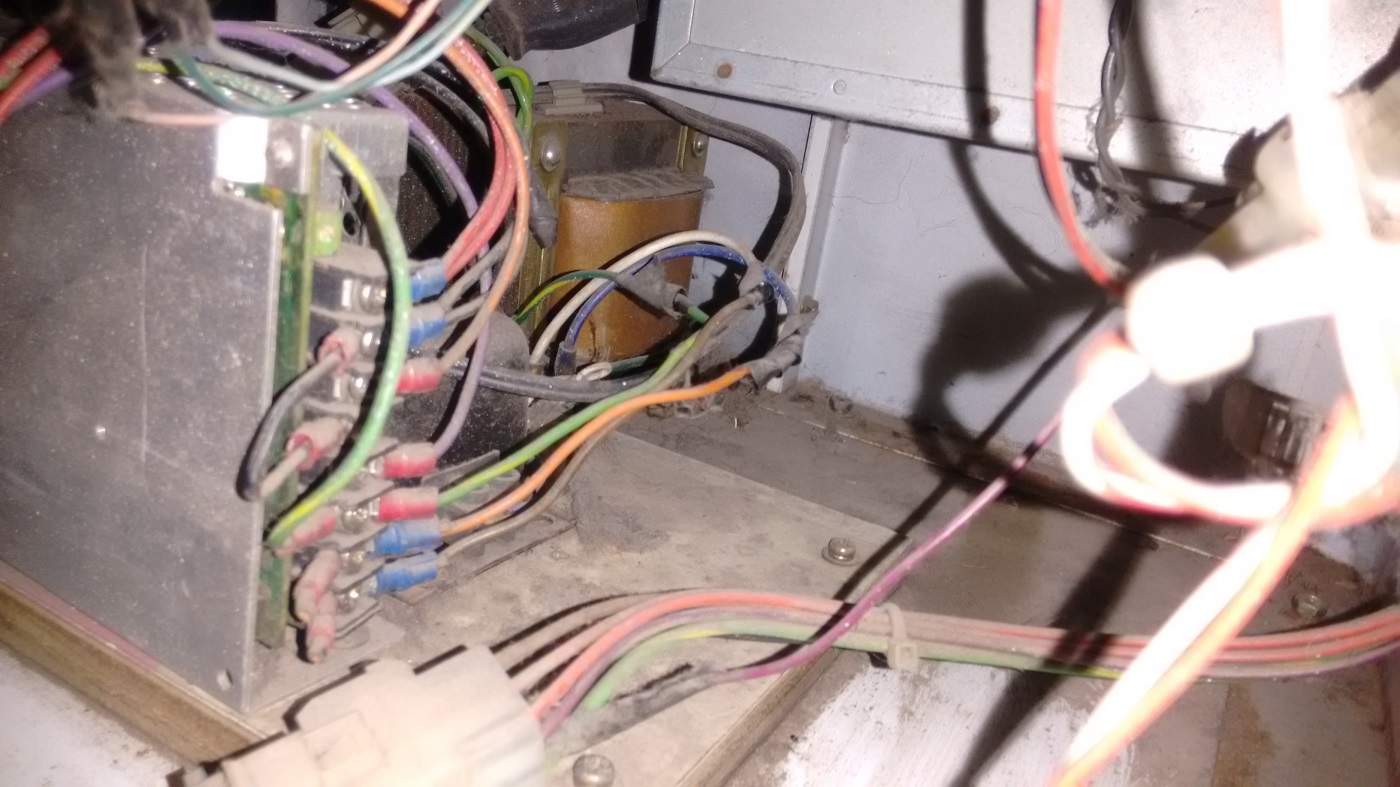 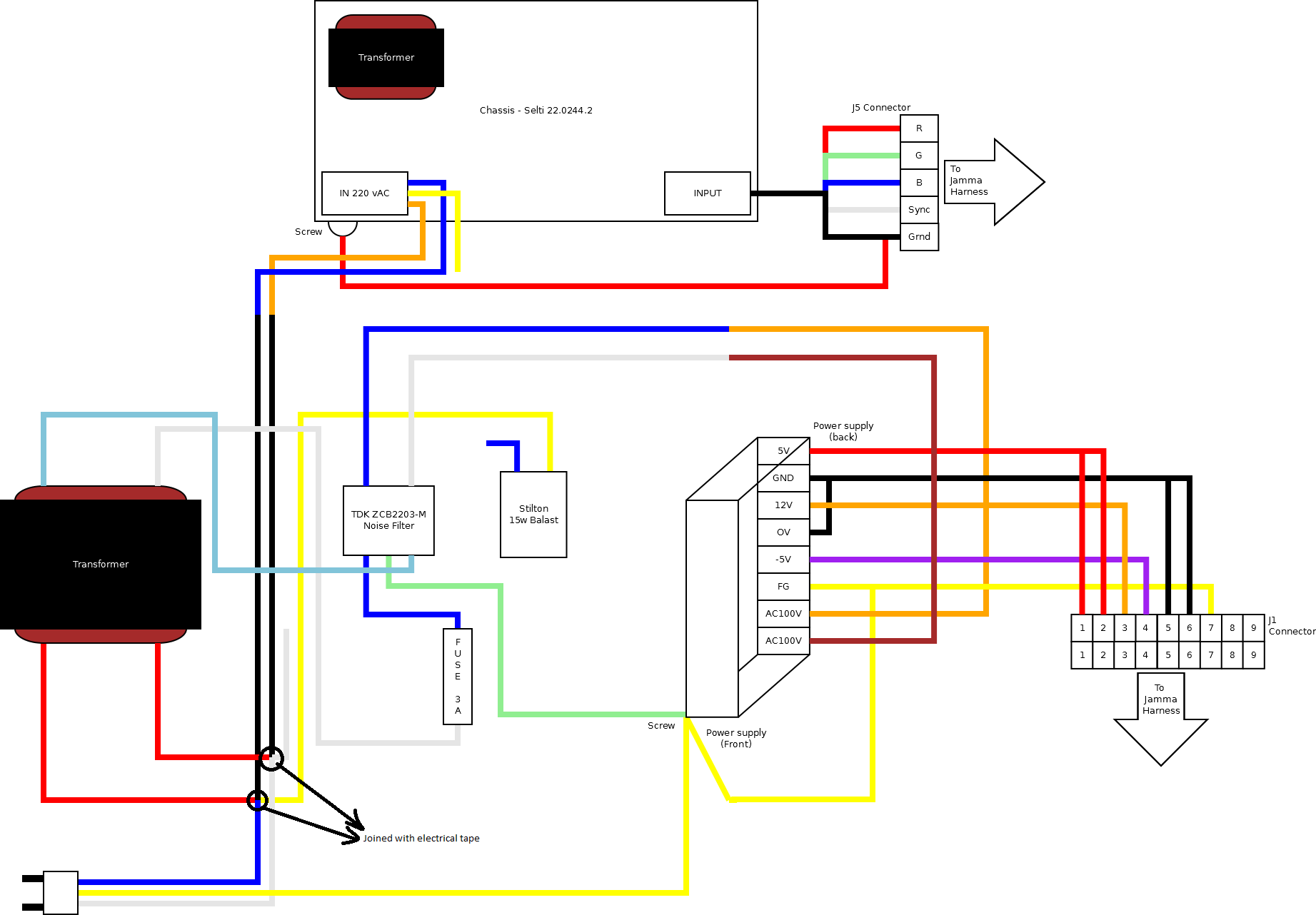 I could test and discard the fuse (made a continuity test and it works ok), and ordered a new switching power supply (this one: https://articulo.mercadolibre.com.ar/ML ... quantity=1, it works both with 110v and 220v). So the next step is trying to replace the old with the new one, and here is where I have some questions: 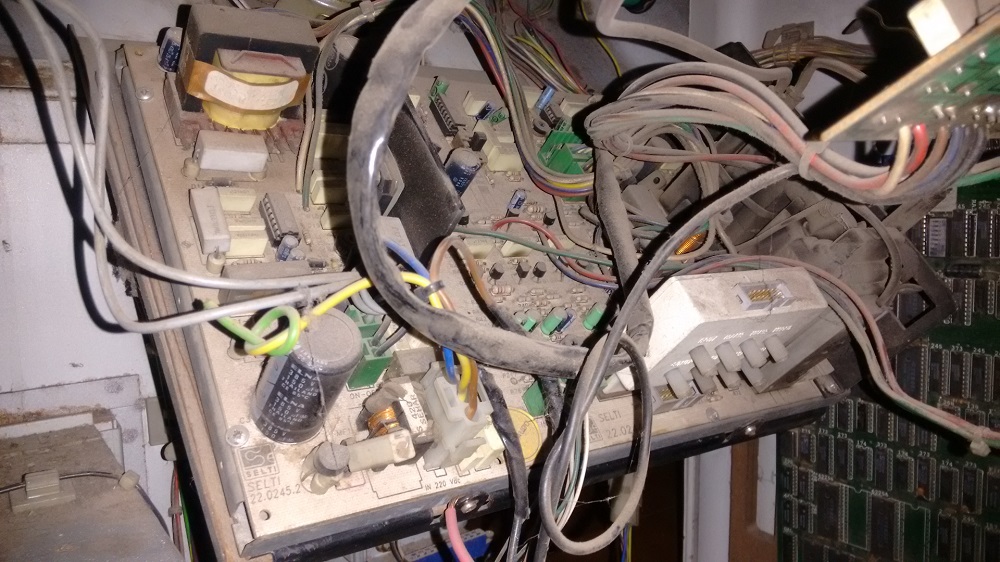 Sorry for the long post and the beginner's questions. Any insight will be appreciated, thanks!
Top

you would have to make sure the marquee light, power supply and monitor were all 220vac but if so there is no reason why you can't remove the transformer
the chassis looks like an intervideo and they were normally ok to run at 220vac

why not try fixing your existing power supply
Top

Sadly I don't have the skills to diagnose and fix the old PSU, but since I already have a brand new one, I'd rather use that (also, it would be great if I could get rid of the huge transformer).

I'll scrutinize the marquee light to see if I can find any indication of the the voltage it's working on. Hopefully, the transformer is only affecting the PSU and not the whole cab.

Thanks for your message!
Top

Your old PSU probably just needs a recap. It's not hard to do.
Top

I ended up replacing the old PSU with the new one, since I confirmed it's 110v. It's an ETA ERB03A, made in Japan - maybe it's the one that originally came with the Pony? I set the new one at 110v, and it worked fine.

Here's a pic of the old one, don't know much about this but the yellow stuff over the pcb is leakage from the capacitors, right? 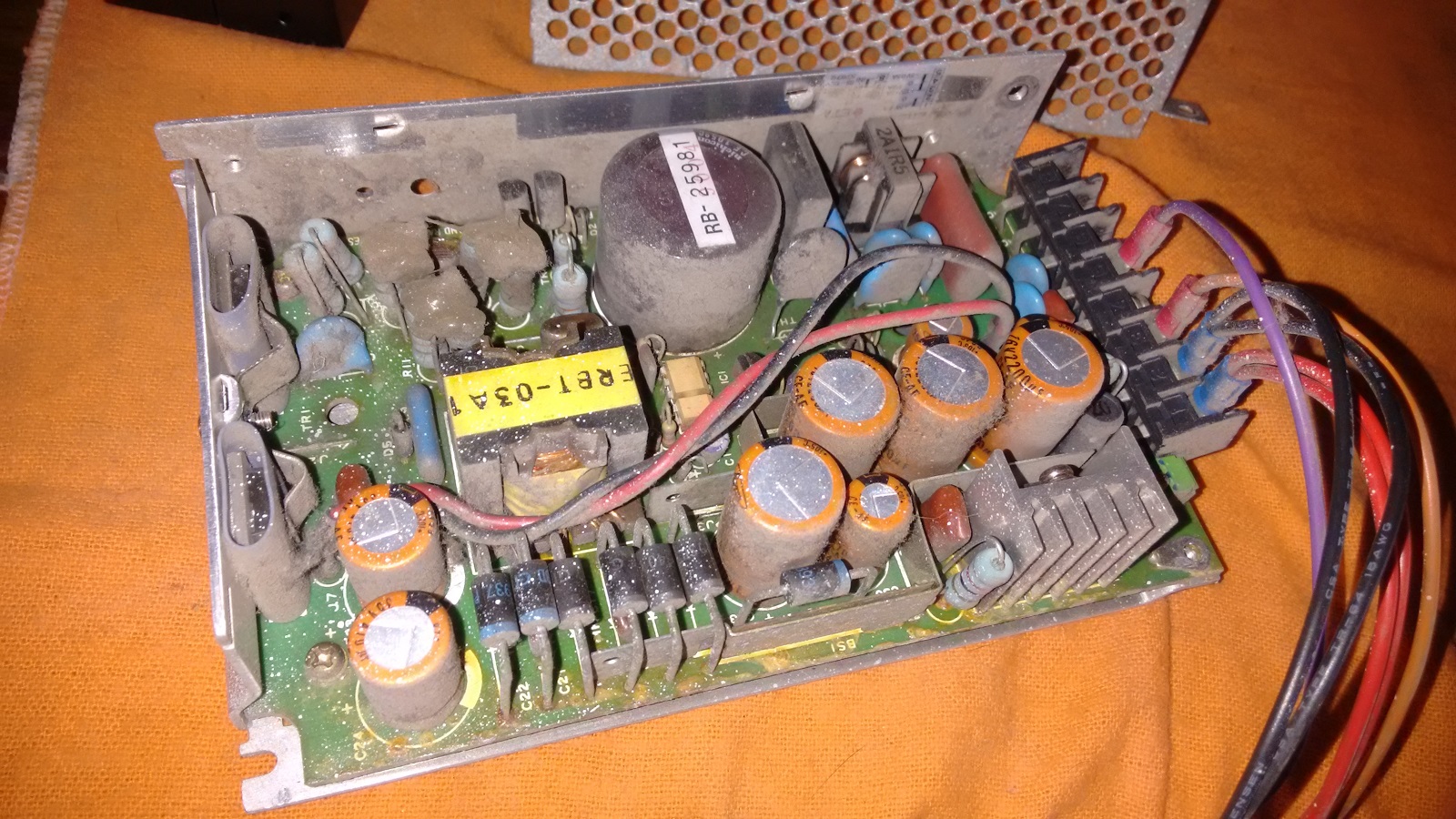 And the new PSU running: 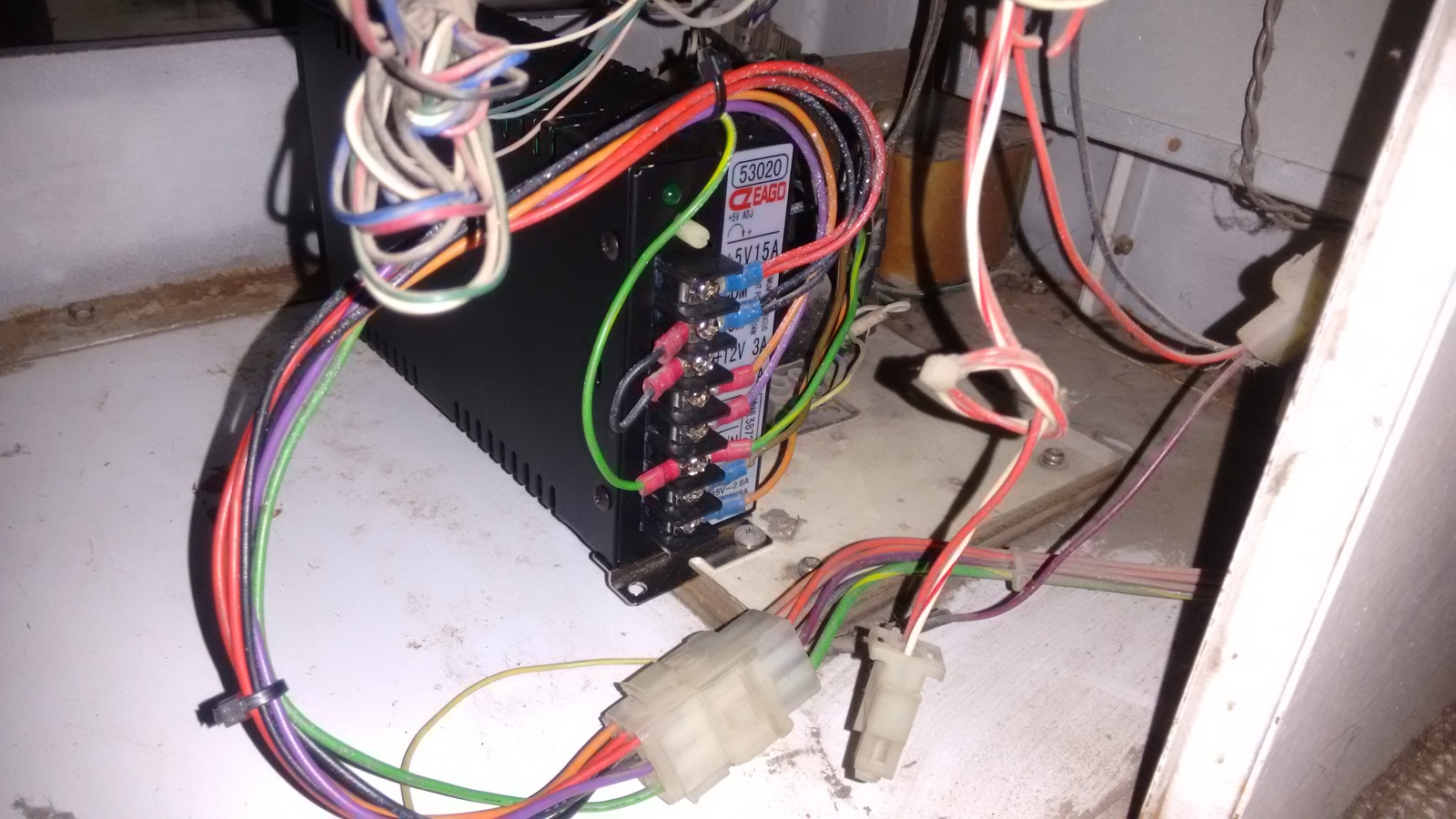 I have just bought a minty Pony Mark 3 for next to nothing.

It had the complete schematics inside the front door. I will take a picture and post it here and where can for archiving.
Top
Post Reply
6 posts • Page 1 of 1