Re: Stools in the UK

Probably not more than £50 to be honest. Will see if Ikea still has anything. My suround sound amp is doing fine at the moment.
Top

The height is 43cm and IMO it looks really nice

The magazine holder is a bonus.

A piece of Akihabara in your Home?
http://akihabarainhome.com
Top

I am afraid I do not have the required skills. I bought it:

http://www.umbra.com/ustore/product/magino-stool.store
A piece of Akihabara in your Home?
http://akihabarainhome.com
Top

That's a rather fine looking stool
My arcade tat

cant imagine its comfortable ...stick some velour on it .....it'll also help stopping you sliding off it.

Only a problem for over-excited lady gamers.
Top

Have this one for all my cabs. Taito stool height, back support and nice foot-rest. Love it.

Got it in a container deal from Japan. Had never seen it before.

I stub my toe so hard on that clear stool.

Having recently got 2 used velvet taito stool to compare with my 2 black faux leather taito stools, I think the black ones are worth every penny. The velvet ones do have a little more character, especially because mine are blue and red, which just goes too perfectly with P1 & P2 in most shmups.
Top

Yesterday I ordered 2 of these ones in black for my Astro - I hope they are nice - I will post some pictures when they arrive if anyone is interested.

LJN wrote:YOU AND YOUR FRIENDS ARE DEAD.
GAME OVER

It folds up, or it could double up as a storage box as well.

I've been undecided on one for my cab, I'm just using a tatty fold up at the moment (although that does have some back support). This is cooler though!
- -
Looking to get a replacement foot panel for my Minicute.
If anyone sees one, let me know!
- -

They just arrived this morning (like 8am, I mean WTF?) and I have to say they are quite Awesome

They are called "STILISTA Cube" 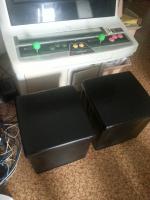 By the way - the Astro is in restauration, so don't ask.

LJN wrote:YOU AND YOUR FRIENDS ARE DEAD.
GAME OVER

Been using Ikea Frosta stools for years. I think I got them not too long after I got my cab, so coming up on about 10 years now. Unfortunately they're not sold in the US anymore for whatever reason, although there are some other companies that sell similar ones for a bit more. Decided to do a little project with them recently, from this: One problem I just noticed though (besides a bunch of little screw ups with the paint), damn things are whiter than the cab.
Top

They look great Japtor, love it!


GermanGameRoom wrote:They just arrived this morning (like 8am, I mean WTF?) and I have to say they are quite Awesome

They are called "STILISTA Cube"


I managed to pick up one of these for under a tenner, only problem was ... the colour; I don't care though as they fold up in 5 seconds and get put out of the way when I'm done.
- -
Looking to get a replacement foot panel for my Minicute.
If anyone sees one, let me know!
- -

IKea seems a popular choice. I also use a couple of stools £12 each.

It's exactly the same dimensions of the single stool, it's just double wide... That looks great! The sharper angles really go with the Aero.

Too many PCBs, not enough cabs!
Top
Post Reply
247 posts