by crunchywasp
I've not had much practice as yet but managed to sit down for a couple of hours this morning so I thought I'd at least post something:

Still crap but I can get the 1st extend on L1 with some consistency, do ok for the first half of L2, L3 goes a bit nuts then I lose most of my lives haphazardly on the L3 boss

Power's by far my favourite. In fact I never play Bomb or Strong at all.

by Akraten
thanks so much , power mode is great!

by Akraten
I played a strong mode game this morning

So, just to register a new score really...

I've been focusing my efforts on L1 really so 2.6 bil's from L1 alone. I need to learn how to score well beyond that now

by Akraten
Great keep it up!

by crunchywasp
Bit of an improvement. I'm still not scoring consistently beyond L1 though

by Jenseits
Scoreboard is a bit empty so...

I'll try seeing this as some starting Point for scoring 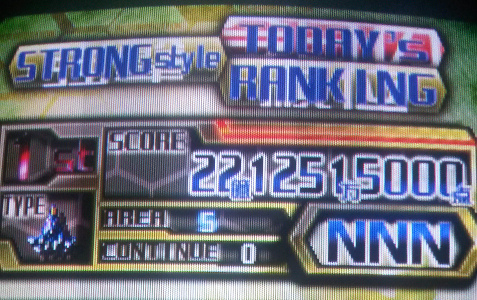 My cab would need some Black Label love too.

How many stages does have this game ?
Is there any hidden second loop available?
All times are UTC+01:00
Page 2 of 3