We can see there's an offset problem x/y. CPS1 does not use this, i guess some more mods to the sprite code are needed.

This is what charles tells us about sprites on CPS2:

The main problem with the non-displaying sprites was in the first two bits.
Part of the Punisher sprite as seen in ram at 0x700000 on cps2.

From some old cps1 doc:

What i read in the old cps1 doc does not seem to match quite what i see with punisher, or i am looking at it the wrong way.
Top

Dude! You really nailed it: 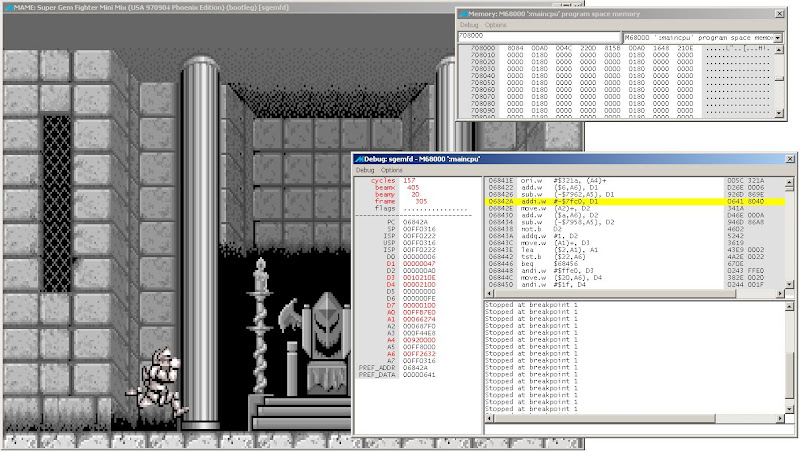 The instruction addi.w #$0040,D1 applies the properties mask at the to be written sprite index data after it's is read from a table in the ROM, so I changed the mask to $8040 and Arthur started to appear. He's at the right spot because I already have a bit of code inserted at the start of the game program which poke the sprite layer control registers correctly.

Edit:I believe the smartest way of doing this would perhaps be have a piece of added code in the video interrupt add 0x8000 to the first word on the sprite table for each sprite entity in the list, after copying the whole table from the originally alloted CPS1 sprite memory.

The sprites were actually blinking but the youtube video can't capture that properly due to difference of framerate with mame.

Originally, when recording that video I used a add instruction to change the sprite list. I changed that to a logical OR instruction and the sprites stopped blinking. Still need to improve the logic as I am not "catching" all the sprite writes yet.

Leo, did you patch all the writes with the 8000?
In Punisher I found a few places to addi the 8000, the first one i did, not all sprites were patched. As a result the sprite list is not parsed fully.
The screenshot i posted with items, it's a single frame written to 700000. I manually added the 8000 to _all_ the sprites.

As for going about the 'way to do it', an extra rom with some routines to jmp to might be a good idea, but i'm not sure if the additional cycles will mess up timing.
We need at least a
- 'fffffx register fix' routine (7000 807D and friends into fffff0- range)
- Generic sprite list fixer

Also i'm not sure how the sprite priority works, as i've not seen enough of a game running. Some sprites should appear below/above others for example, punisher can stand behind/in front of others.
Maybe it's already fixed by the order of the sprites in the list. (first entry is the lowest, others draw on top of it?)

In punisher, there is a bunch of odd sprites at the first 0x1F as well.
These have parameters like "012E FEEC 4F32 0115". The first F causes a problem, the sprite is not drawn and the list is not parsed further. If i kill those two entrys, i can get the rest of the sprites.

Also, the register to draw the frames.. it works 'the other way around. E.g. you write a list into 708000 when 700000 is visible, then flip the regiser, and draw into the invisible range.
Megaman has a proper mechanic for doing this which i borrowed partly: It uses ff8060 to hold 0/1 which it pushes to the latch register, and ff8061 to hold ff or 00. It flips these each cycle

When some cps1 games turn off sprites, they just write 0 into 800100. But we need a consistent mechanic to clear the screen, as not all games seem to clean up the sprite list.
Right now i have my code set up so it writes into 7080 by default, but i can poke stuff into 700000 to test.

Edit: My theory is right, we cannot just add 8000, at least punisher will have issues. I patched a few more routines to add 8000 (punisher uses several writes for id's to the list, for player chars(odd/even block), enemies(odd/even block), objects etc.). You can see in the shot below, the 'bar chair leg' is 'in front' of the punisher's leg, it should be behind it.
For Ghouls, 8000 may work in most cases, but there may be parts where sprites (doors, destroyable objects etc.) should be drawn in front/back of other sprites.

I don't want to change the game code. I want something that "translates" the sprite list to the format CPS2 uses. So a routine slapped into the interrupt code is a pretty fair bet.

I let the game render the sprite list at it's original memory position (Daimakaimura does it at 0x920000) then I have a routine copy it to the CPS2 sprite memory (the 2 8KB SRAMs on the B board).

To make the sprites appear I just changed the code we borrowed from SSFX2 slightly from:

This of course is experimental code... lol

-ud
"Sin and death's got the whole world gettin' illa, but I praise God for the Blood Spilla."
Top

I think we need to take the info from ram and merge it with the sprite list for cps2 properly. My 'fix' for the first bit is dirty. At 800100+ $66-$67 that register has an offset for a page in 900000 ram with "Priority mask Sprites". If we use a "generic" fixer routine, I think we can merge/translate the priority bits from there into a cps2-compatible sprite list with correct prio for the sprites included.

. I hope they are just two bits for each tile which we can stick into the first byte for entries on the sprite list at 708000..

@leo: Alternative option for your suggestion would be to patch the list writes to 708000 and correct the invisible frame with the sprite prios just before the latch toggle, this saves some cpu cycles as we skip the copy action.

What I don't understand is why capcom decided to do sprites this way for cps2, the cps-a chip seems to get a lot less action.
Top

By what I understood from the docs and from the circuit, write to 8040E0 causes the sprite RAM to swap the bank so you can write on the second half. 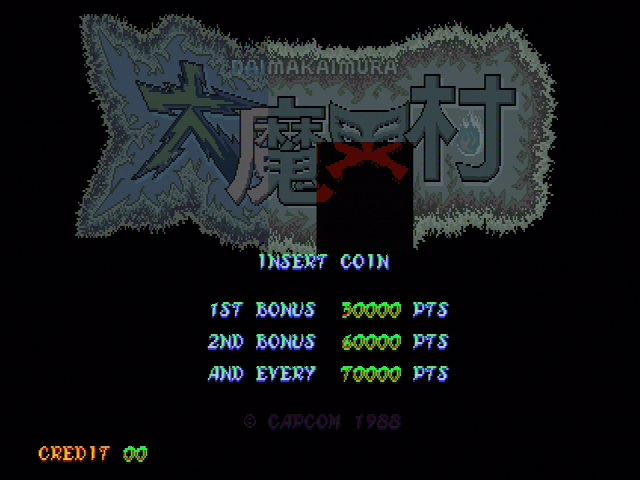 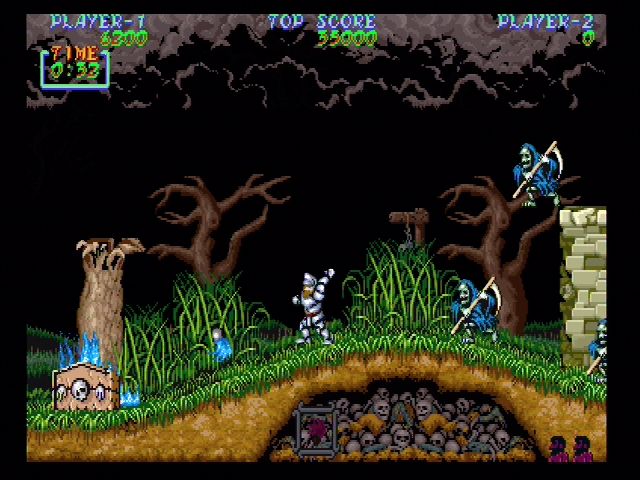 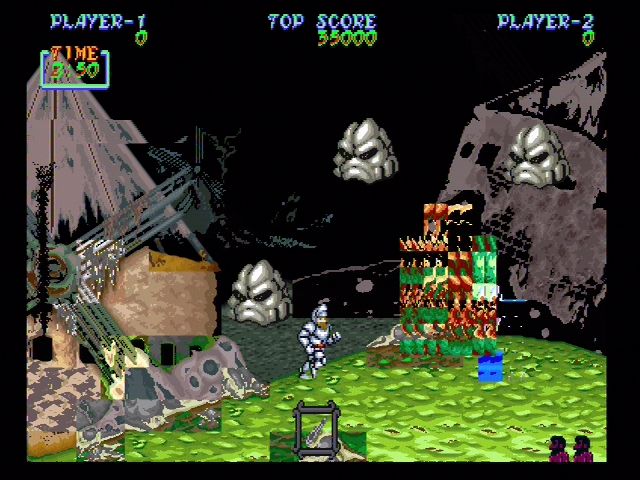 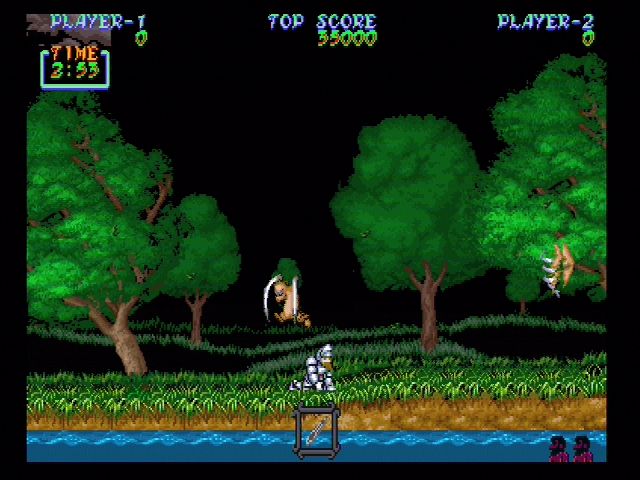 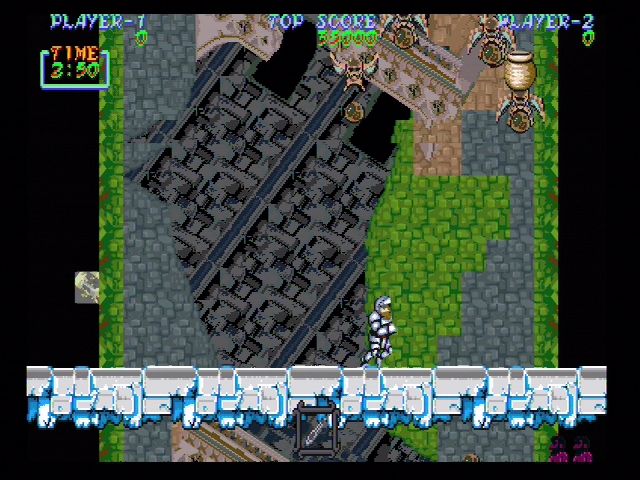 Thanks to Charles MacDonald's documentation I was able to properly setup chores like reset the sound CPU and fix the I/O init for the CPS2 so the game even boot on the real thing...

The wrong tiles display also happen in MAME.
But unlike how it runs in MAME, there are palette problems everywhere but at least sprite priorities seem right.

leonardoliveira wrote:The real hardware has no need for the latch toggle write to display sprites... lol
I had the write to 8040E0 removed on that to test if it was required and it is not (for the real hardware at least).

By what I understood from the docs and from the circuit, write to 8040E0 causes the sprite RAM to swap the bank so you can write on the second half.

So, back to the list, we have sprites now anyway, who cares how it's done

I checked out a bunch of other games on CPS2, they use the priority bit for sprites a bit more. I can see variations like 8000 and 6000 being used.
For games like Punisher and C&D we really need to figure out how they decide on the sprite prio and where the bits are stored.

Btw, hidden object test for Punisher: (does not show 'prio') like SF2:ww/ce/hf do

I understand that this thread has slowed down slightly recently... But I've been still working at this.

I spent the whole day today trying to improve the sprite tables handling code and I changed the way my controllers change code work.

Now, I have the player(s) inputs tied directly to the CPS2 player inputs. But for the special control buttons (start, coin, service, test) I process them on the vblank interrupt and store the output already converted into CPS1 format at a empty spot of the RAM (using A5 as pointer, just like Capcom do). Then on every reference to 0x80001E which relate to the buttons (some games use that address to enable hidden features, like the advanced OBJ test on Punisher) I redirect the reads to my value on RAM. 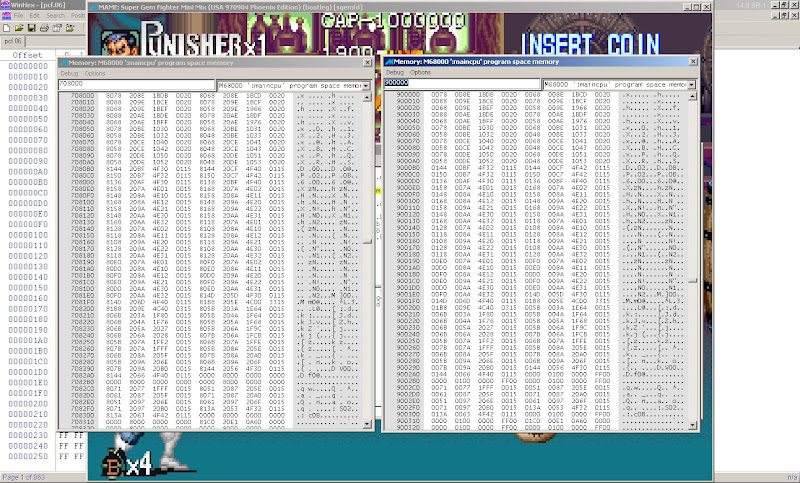 I have this one working 100% inputs now. Still need to fix the coin locks and EEPROM.

But we still need a fix for the priority problem: 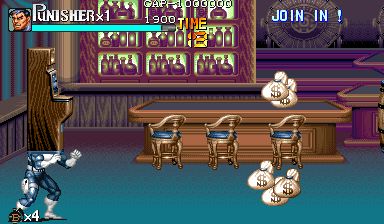 I'll only bother with EEPROM fixes after figuring out the last piece of the puzzle (sprite priority).

AWESOME! You can see the work behind that. It's not just a couple of byte change

Brilliant! I'm glad this is still being worked on

After reading this whole thread several times again, jedpossum's comment on Super Street Fighter2 Turbo about it being designed to play identical as possible to the original Street Fighter 2 CE/Turbo, I looked how it draws it's sprites and it WAS ACTUALLY DRAWING it's sprites backwards. Because it has a CPS1 engine, that game might be a real source of information for this project.

As everyone can see on the pictures Asure's idea of drawing the sprites list upside down kind of almost work.

But for that to work I had to disable the code which detects the sprite list end. Also there's some issues with the data copy. I am not sure if it's due to my algorithm being crap or if it's because I have the sprite list end check disabled. 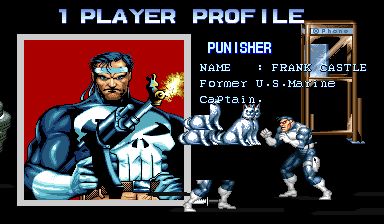 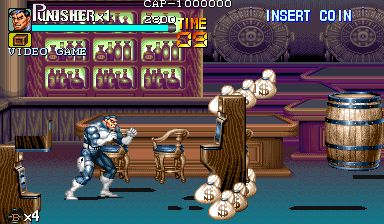 Another thing I just implemented was use the data the game writes to the CPS-A register 0x800100 as the toggle of odd/even for the sprites double buffer. Currently I only copy the sprite data from 0x900000 but I plan on implementing another branch of code to copy from 0x904000. I am not sure if that's really important

Well, at least I have some progress...