I'm looking to create a comprehensive list of the history of original video games mascots and logos, documenting any changes made during the formative years of any company that developed a game that was published on a licensed arcade pcb at any point in time, also if there is no official mascot then the most associated or appropriate character or logo/icon may be used instead.

for example rare and battletoads is included on this list however natsume and pocky is not, kikikaikai was originally a taito creation, it is possible is this an uncredited natsume creation or did they buy the licence from taito? and they also did not release any games in arcade format. also for companies where mascots that were console only but they released arcade games and di not use a character from an arcade IP as a mascot it will be noted as such

I'm not interested in companies did not develop games that were not published in an arcade format, and also not interested in later mascots (i.e. the 90s anthropomorphised era) i am looking for the original mascot(s) - see sega and atlas below for what i mean


what i have so far, just started compiling this so a lot to add particularly in other companies {" .}

! - not 100% what i was hoping/expecting but included for completions sake - input for general consensus would be appreciated
? - further research and evidence required to support conclusion
@ - further details or proper sourcing/referencing required

! - 8ing - split 8 logo - current parent company Colopl has a panda face in a ballon as their mascot/logo
@ - able corp - ????
? - A.M.I. - logo only
@ - acclaim - meh
activision - pitfall harry?
? atari - commander champion - mt. fuji (logo)
! atlus - console - jack frost - company started in 86 - first appearance 95 source franchise is console only (consistent chibi aesthetic predating first appearance - tater and spud and regular megami tensai franchise)
bally - cursive text logo
bally-midway - ??
bandai -
barco -
bit managers -
! broderbund - three crowns logo - lode runner dude (only game released in arcade)
? capcom - arcade - super joe (1985) - captain commando (USA 1990) - wireframe globe with ryu silhouette overlayed (street fighter 2 TNC - 1993 onward) - no official company mascot. megaman has probably seen the most use in media outwith video games starting in the late 80s early 90s before the street fighter boom but the arcade games with him as the title figure are fighting and I would place them under street fighter rather than action/platformers that are the staple genre he featured in prior to this so Ryu would supersede him as a mascot in this respect of arcade releases being the primary consideration)
? cave - evac industries cube or Reco from mushihimesama (both unofficial but recurring usage) or neither and just the C logo
centuri -
cinematronics -
compile - puyo puyo blobs
data east - karnov
! enix - dragon quest slime (actraiser was released in the arcade)

aicom/yumekobo/sammy - where to differentiate? or should they be sammy has guilty gear but thats is a late 90s/2000s franchise and both aicom and yum predate it as subsidiaries of sammy
Last edited by jugemscloud on February 17th, 2018, 12:33 pm, edited 37 times in total.
Top

moshpit wrote:Artwork templates are all done now. All vector files are ready. 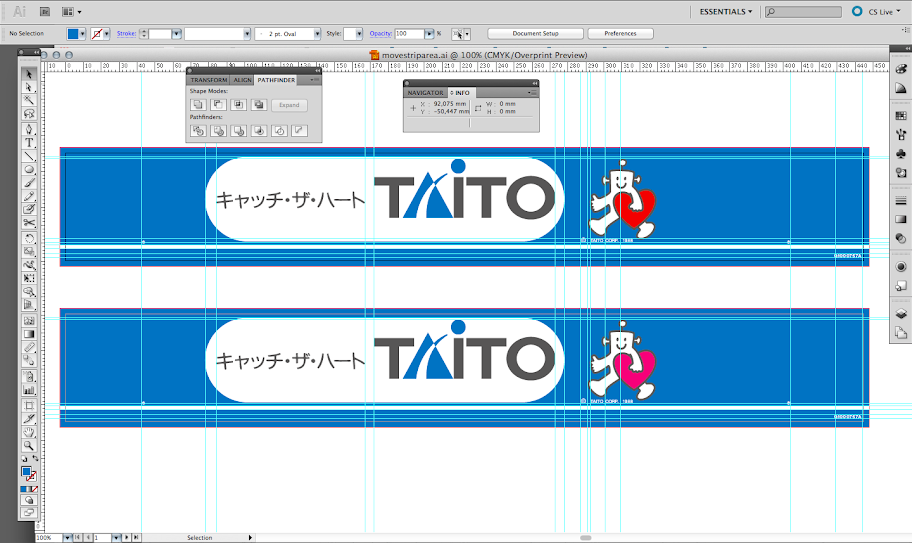 ^ was that the Taito mascot at one point? It’s from the mt8 thread

That definitely was used as a secondary logo if not a mascot for a few years (the one that immediately preceded or overlapped with bub and bob perhaps?) i have a memory or two of it popping up elsewhere but can't place them just now. That was something i was trying to resolve in my head but couldn't quite grasp it, I'll expand the scope to cover logos as well as it'll be interesting to document that stuff particularly with the subsidiaries such as aicom, yumekobo and Sammy when they are properly expanded upon and potentially the only means of visually differentiating/identifying them. hopefully there's enough interesting ones like the taito one that it's not just letters (Sammy) and geometric abstracts (Atari)

Also to anyone reading just chime in if you remember things or can cite a webpage and I'll follow stuff up with proper research later.
Top

cheers legend, again like mark giving me food for thought, that silhouette (the ryu win pose) does seem as it if is adopted by capcom as their logo for the street fighter franchise (though somewhat inconsistently), the inclusion of franchise specific logos such as this will also be considered (this does not mean fonts or graphemic structures/alphabets - example the ryu image here would be included but the street fighter text will not at the present time). my searching is telling me thats from mvc1 on cps2 is that correct, and is it also the first appearance of a decontextualised used (removed from game)? those appear to be 16 bit colours in the image (to my eye)

I'm going to try to get the basic structure down to see what information is available and what is undocumented, I'm just going to go through japanese companies at the minute, with a slight aside to other Asian ones like PGM and Dooyong, and major western devs (Atari, WMS) just now before this becomes completely unweildy.
Top

jugemscloud wrote: i have a memory or two of it popping up elsewhere but can't place them just now.

jugemscloud wrote: i have a memory or two of it popping up elsewhere but can't place them just now.

cheers thom, the mascot for taitotech the arcade arm of the company then??
Top

Actually, I just realised that the Ryu silhouette above is just a reworked version of this thing: https://i.imgur.com/dwaRZ9S.jpg
#ARCAOE DTAKU's list of arcade style konsole games (and ports with extras)
#MY FIGHTING GAME PHDTDGRAPHY PRDJECT
Top

LEGENOARYNINLIA wrote:Actually, I just realised that the Ryu silhouette above is just a reworked version of this thing: https://i.imgur.com/dwaRZ9S.jpg

yeah i was thinking the hadoken silhouette (maybe even just the fireball itself) is probably the most commonly associated image with street fighter. that image is from at earliest new challengers given the prominence of balrog/m.bison which is also the first on cps2 so perhaps the cps2 logo for street fighter.
Top

Hmm, the '93 championship logo had the crossed arms Ryu pose, so I guess that's the original version.

updated a little bit today, slowly working my way through KLOV and couple of other sites to try to get most companies accounted for even if its just logos, should be done in about 3 years

LEGENOARYNINLIA wrote:Hmm, the '93 championship logo had the crossed arms Ryu pose, so I guess that's the original version.

thats a really interesting video - it states its street fighter 2 turbo (no super, no additional text) just before the logo appears and they're also playing on SNES so a blanket logo for the street fighter franchise from at least 93

i added a bit as well for the first iteration of SNK for them to have fighting mascots also as it seems appropriate given the above, and am considering this for midway and MK as well
Top

moshpit wrote:Artwork templates are all done now. All vector files are ready.

^ was that the Taito mascot at one point? It’s from the mt8 thread

It's also on the Taito service stickers that you can find on the cabs (E2, E29, Canary... etc.). It's also featured in Super Puzzle Bobble for PSX2

Catch- The character who is apparently a Taito mascot. Looks like a robot carrying a heart, hence Taito's motto "Catch The Heart".

moshpit wrote:It's also on the Taito service stickers that you can find on the cabs (E2, E29, Canary... etc.). It's also featured in Super Puzzle Bobble for PSX2

Catch- The character who is apparently a Taito mascot. Looks like a robot carrying a heart, hence Taito's motto "Catch The Heart".

Cheers Mosh, looks like it maybe a Japan/Nippon only mascot, I'll have a trawl through my eu taito legends discs in the next week or two to see if it makes an appearance on those.
Top
Post Reply
14 posts • Page 1 of 1